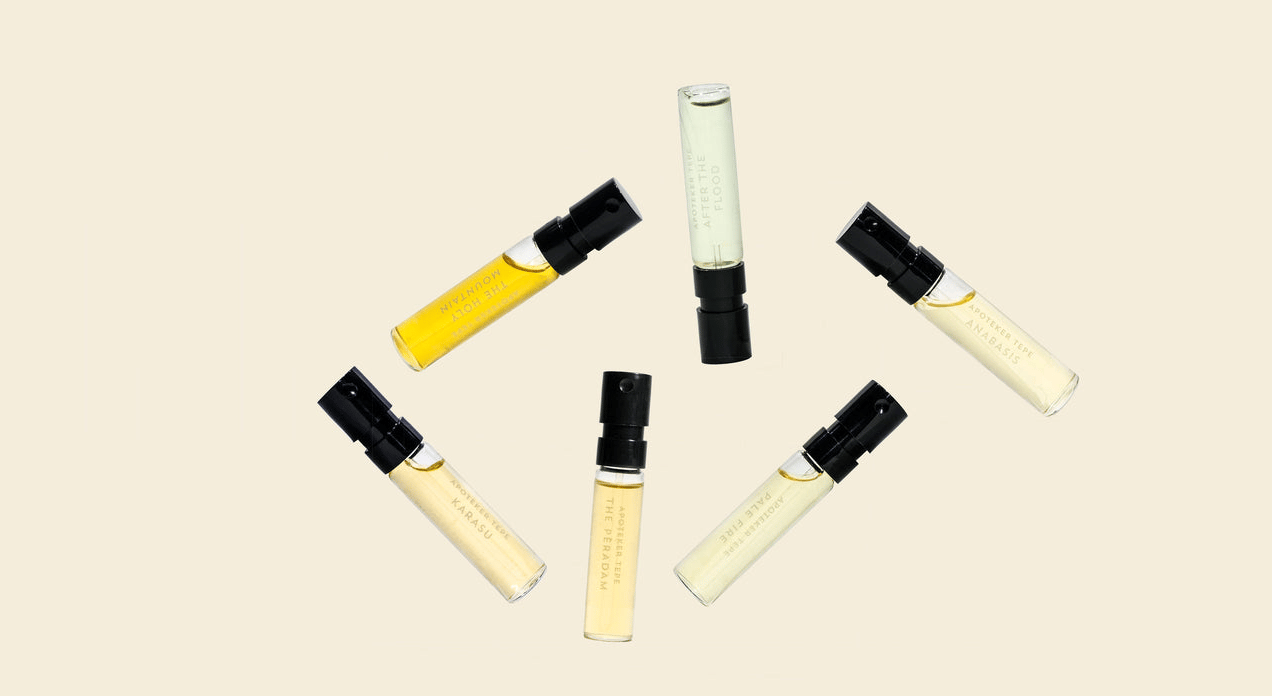 After the Flood is the scent of soil, water, and the delicate stirrings of undergrowth in spring. A contemporary aquatic, After the Flood is both earthy and clean, fresh with hints of loamy darkness. Its delicate green color is due to violet leaf absolute, which flickers in and out of a base of mushroom, soil, and moss like green sunlight though thick branches.

Anabasis is a long journey upland, a wind through the trees in early spring. Cool and distant, wild and free. Anabasis (from the Greek 'to go upward') is an expedition from the coast to the interior of a country. It is also the title of two great works that describe such a journey, one by Xenophon and one by Saint-John Perse. Anabasis is adventurous and mysterious, bringing the scent of Japanese shiso and mint wafting through a forest of cedar and pine.

Inspired by the Oaxacan Day of the Dead, it features prominent notes of copal incense, marigold, olibanum, and wood smoke. A perfume that leans heavily into the disjunction between sweet florals and smoke.

The Holy Mountain is a smoky hearth strewn with incense, an enveloping layer of aged wood and resin melting over a core of dry heat. Mysterious and lasting, The Holy Mountain stays with you and around you, a reminder of warmth and sensuality. It includes over seven precious woods and resins along with a rare extraction of Lapsang Souchong tea smoked slowly over pinewood fires.

In Japanese mythology, karasu tengu are powerful and vengeful spirits who live in the midst of deep forests, often taking the appearance of crows or of wandering priests. Those brave enough may call upon them through prayer and incense-burning if they are lost, confused, or helpless. Apoteker Tepe’s Karasu combines some of the most traditional raw materials in kōdō, the Japanese incense ritual, to create a fragrance that expresses the spare, transcendent asceticism of a prayer rendered in smoke, dissipating in midair.

Pale Fire is a deconstruction of amber, the first fragrance type to rely on synthetics, but changes this ‘fantasy’ note into something real— the integration of Spanish wildcrafted labdanum absolute and a rare supercritical extraction of Tahitian vanilla. Like the poem which bears its name, Pale Fire exists between appearance and essence, completeness and incompleteness, real and unreal— it is the smell of the feeling the Portuguese call saudade— the longing that remains after a disappearance.

The Peradam combines the most precious materials in perfumery for a fragrance of unusual character, depth, and rarity. According to the French author René Daumal, a 'peradam' is an object that only appears to those who seek it. For those who have been seeking the most precious and rarely experienced raw ingredients in perfumery, The Peradam combines a rare SCO2 extraction of Jasmine grandiflorum, real orris butter, and sustainably harvested Mysore Sandalwood into a fragrance that is warm, enveloping, uniquely addictive, and impossible to find elsewhere.

0 Items in your cart
Keep shopping